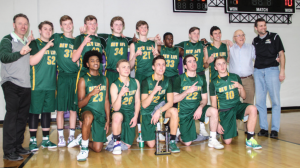 For the past 18 years, the Boys Varsity Basketball program has grown under the leadership and coaching skills of Coach Doug Linton. Today, New Life Academy announces that it has accepted the resignation of Coach Doug Linton as he sets his sights on Collegiate level coaching. The past 18 years have brought Coach Linton and his players many wins, including a 2016-17 Conference Tournament Championship, which concludes his time at New Life Academy.

“I want to thank the entire NLA community for 18 wonderful years as head boys’ basketball coach.  The time I have spent coaching has been a blessing and joy for not only me but my wife and children as we raised our family at New Life.  I have been blessed to coach some amazing young men over that time and I have enjoyed forming relationships with them that will last a lifetime” said Coach Linton.

Coach Linton indicated that his time at New Life Academy has been a blessing in his own family’s life as raised their own family at New Life and formed great relationships with students, parents and staff over the years. He is particularly grateful to Curt Wetsel for his mentorship and friendship over the years. While his decision to move on to collegiate level coaching is exciting it is also a difficult one due to the relationships and impact so many people have had on his family. “I am confident that great things will continue to happen here in the future and look forward to seeing what God has in store for New Life Academy.  Thank you for allowing me to serve these young men and trusting me with influencing their lives for Christ” says Linton.

The search for the next Head Boys Varsity Basketball Coach will begin immediately.  We are excited about our program’s future as we move into a new era of New Life Academy Boys Basketball.

No Events This Week

Events are added by athletic staff.
View All Events